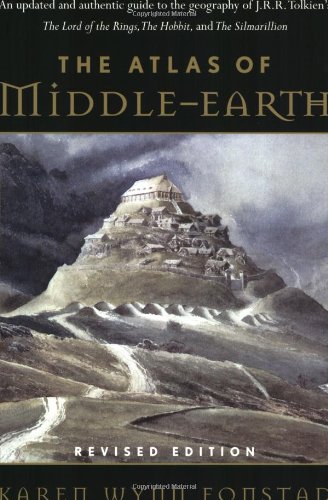 The large brown moth reminds me of the Philippine Mariposa moth, but smaller.(Atticus Atlas). Unlike my top 20 list of D&D modules, this isn't a favorites series, but a comprehensive overview of "essentials" adding up to a grand atlas of Middle-Earth. Artist Jon Roberts specializes in making them. Knowing that The Girl of Fire and Thorns has maps makes me want to read it! No, Precious, we mustn't.) CONCLUSION. Though you can't hang this on a wall, I would highly recommend the Atlas of Middle Earth: http://www.amazon.com/Atlas-Middle-Earth-Revised-Karen-Fonstad/dp/0618126996. €Gollum's Stand In” shows co-producer Rick Porras' work as Gollum for a day) • Middle-earth Atlas Interactive Map • New Zealand as Middle-earth (A collection of short featurettes). In a special place by my bed for late night flashlight reading—books like J.E.A. I've been through The Silmarillion, and more importantly I have The Atlas of Middle-Earth handy. Tyler's The Tolkien Companion (which I recently wrote about here for The Huffington Post) and Karen Wynn Fonstad's The Atlas of Middle Earth. I recently completed another reading of Tolkien's The Hobbit and Lord of the Rings trilogy, this time using The Atlas of Middle-Earth and The Journeys of Frodo as supplements. Considering that the Megaloceros went extinct about 10,000 years ago and Middle-earth is supposed to be an ancient version of Europe this even makes a lot of sense. (I'm using Karen Wynn Fonstad's Atlas of Middle-Earth as a source, and fighting back the urge to base a campaign on it because the maps are so pretty. An excellent coffee-table compendium is J.B. Http://1.bp.blogspot.com/_w5zmQN20EOc/RzlHUX9UbYI/AAAAAAAABW0/rUz8pIrYdFg/s400/preserved+butterfly.jpg. The road from Bree to the Brandywine Bridge is 75 miles in the Middle-earth Atlas. How many times should we be reasonably expected to run that route? (I also liked Kristin Cashore's maps.) I even bought The Atlas of Middle-Earth by Karen Wynn Fonstad because it was full of maps on Middle-Earth. Especially now that I've found my long-lost copy of The Atlas of Middle-Earth (JL showed me it was “hiding” on the bookshelf) I'm really itching to get back to The Silm… By: CORDE5 BLOG on August 14, 2006 at 1:40 am. Post's Atlas of Fantasy , but the itch may be scratched immediately with Google and TVTropes' entry on Fantasy World Maps.